There’s a word that’s used to describe wings like these.  It’s extremely accurate and really summarizes the whole experience: Average.

The establishment claims their wings are never frozen and always fresh.  That may be the case but if you fry them to a level of dryness I’ve just experienced then you ruined the point of fresh wings.  I’d much rather have juicy, tender (crispy outside) wings that were frozen than a dry “fresh” wing.

I’m not saying they were shit.  Again: average.  They were edible, had a bit of moist in the middle and the outside did have a nice crisp level.  I felt they coated them in something dry though.  It wasn’t a full on batter, but there was something soaking up the sauce and after 10 minutes or so took the crisp level down severely.

The size was great and the bones were sturdy, that’s something you find in a fresh wing so I do believe they must never have been frozen. 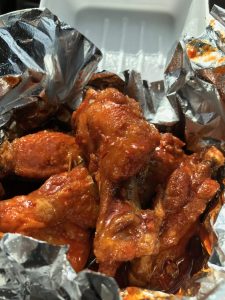 I’m just gonna tell you about the peach and sweet thai at the same time as they were nearly identical in flavor.  They were both sweet and cloying. Their “sugary” flavor was probably from a stupid amount of corn syrup.  The “peach” flavor was like the bitter skin of a peach and not the sweet insides.

They ask you what heat level you want for all sauces so I went with medium on the sweet thai and extra hot on the peach.  That heat level is the only thing that I could use to differentiate between the flavors.  Though the extra hot was lacking anything extra.

The garlic was boring.  Yea, there was some garlic flavor, but there was nothing exciting about it.

Weird.  I didn’t hate it but it was not normal.  It almost seemed more yogurty based than mayo based and I feel they didn’t have any spices in it at all.  Like they just lumped together some yogurt and blue cheese chunks.  I didn’t not like it but I wouldn’t want it if I had other options.