I’m just gonna be real here.  I know this chili.  I know it intimately. 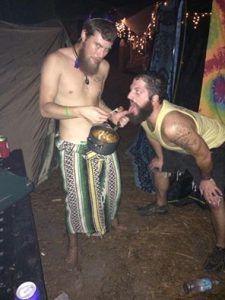 First time I had it I was heading to a music festival called Hulaween.  It’s turned into quite the affair these days but I was at the first one and it was pretty sweet.  It was a great time until it started flooding and the rain came down so hard it collapsed my brand new tent.  My wife and I ended up sleeping in the front of the truck until sun up and we drove our asses out of there.

Anyway, while loading up on supplies at Wal-Mart I grabbed a six pack box of chili.  It was Stagg’s, never had it and figured it would be alright.  At this point in my life canned chili just that, canned chili. It would do while drunk out in the woods.

Well, we ended up in weird places doing weird things out there and let me tell you, this chili was heaven-sent.  At some odd hour of the morning my buddy Ferro was feeding it to me straight from the pot.

We had some Muenster slices we were adding.  Now that’s my go-to: Stagg’s and a slice of Muenster cheese. 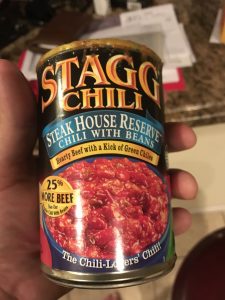 The chili has class.  You got real chunks of peppers, tomatoes, beef and steak.  Good bean balance and a delightful hit of heat.  The heat’s simple, round and mouth covering.  It’s not in your face or super intense, it’s just right.

There’s really not much more to say about it.  It’s a kick ass canned chili and definitely my favorite on the market.  I ordered a six pack of Stagg Silverado Chili that I’ve never had so I’ll be back with a review on that once it gets here!