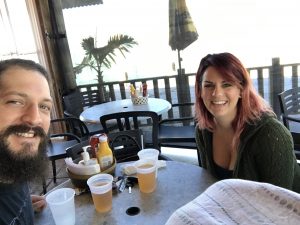 I’ve been going here since I moved here.  I prefer this location to Siesta for the view.  Right on the stretch heading out to Mote with a gorgeous view of the water.  This is also where I had my obligatory Sarasotian spotting of Brian Johnson.

My favorite menu item has always been the soft shell crab sandwich, though it’s seasonal and wasn’t there yesterday.  Every where else I get that sandwich there’s usually too much bread to crab ratio and the crab shell has parts that are still kind of like fingernails.  Somehow the Dog makes it just right.

The service is always fantastic and the food has never disappointed, but for some reason I’ve never had their wings.  Bout time I made that happen.

They have two flavors, Hot and the Carib BBQ which I went with.  Before I really dive into this all-star sauce, let me just say the wings were perfect.  Size was just big enough to push the limit, but never strayed over.  The crisp level was off the charts while reserving the tender, moist and fresh innards.  They nailed it, and I can greatly appreciate not having to ask for “extra crispy” like so many places require. 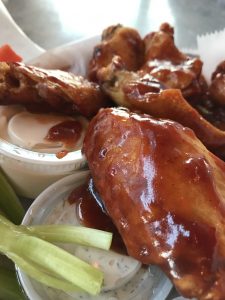 At first I was ready to dock points for the sauce coverage.  Looking at the wings there was quite a bit of visible naked flesh.  After picking up my first wing I noticed a massive puddle at the bottom of my basket though and ended up having more than enough sauce to cover everything just right.

I’ve long said that the Gold Rush sauce from Munchies is my all-time Sarasota favorite.  It’s just been beat.  I had to request some take home of this amazing BBQ sauce so I could try it on the ribs I had in the oven.

It’s an explosion right upon hitting your tongue.  Zesty lime mixed with a smoky jerk spice blend.  It has a sweet, but not too sweet, and thick BBQ layer floating behind it.  The balance is incredible.

I was licking this stuff up off the plate, it was that good.  It was killer on my ribs I had for breakfast just now too.

The blue cheese was top notch.  The dill sauce was a lovely addition as well.  It was thick and almost like a fatty greek yogurt, but probably just mayo.  The dill was packed into it.  Was great for fry dipping and wing dipping.  I went back and forth between it and the blue, couldn’t pick a favorite.

I was all ready to give this a perfect 10 then my last wing broke and I was digging chunks of bone and tendon out of the bite.  Dammit!

Oh well, perfection isn’t easy and this was damn near tipping on it.